Thirteenth Station: Jesus Is Taken Down from the Cross 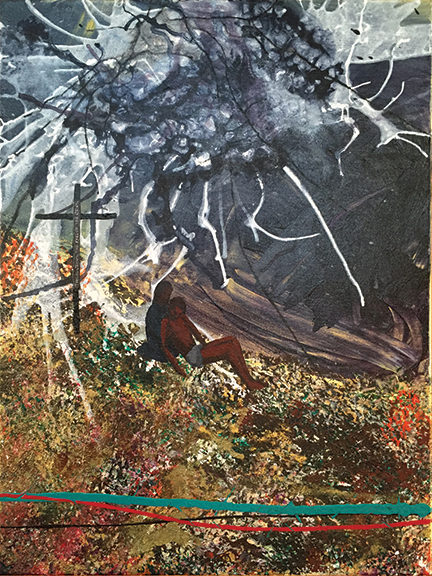 After these things, Joseph of Arimathea, who was a disciple of Jesus, though a secret one because of his fear of the Jews, asked Pilate to let him take away the body of Jesus. Pilate gave him permission; so he came and removed his body. Nicodemus, who had at first come to Jesus by night, also came, bringing a mixture of myrrh and aloes, weighing about a hundred pounds. They took the body of Jesus and wrapped it with the spices in linen clothes, according to the custom of the Jews. Now there was a garden in the place where he was crucified, and in the garden there was a new tomb in which no one had ever been laid. And so, because it was the Jewish day of Preparation and the tomb was nearby, they laid Jesus there.

The experienced soldiers, watching the slow deaths on the cross, now break the legs of crucified men so they will die faster. But Jesus is dead already, confirmed as they thrust a spear into his side, piercing the pericardium around his heart. Joseph and Nicodemus arrive with the order from the governor allowing them to have the body. Jesus’ body is lowered into Mary’s arms, and she is able to hold him once more.

Jesus’ body is laid in the tomb, a spot that was always meant to be temporary, until after the Sabbath was over and the work of burial could be completed. For him, the suffering is over.

My spirit faints within me; my heart within me is desolate.
I spread out my hands to you;
My soul gasps to you like a thirsty land.
O Lord, make haste to answer me; my spirit fails me;
Do not hide your face from me or I shall be like those who go down to the Pit.