Church of the Holy Cross is home to an outdoor labyrinth for the use of anyone in the community who would like to deepen their spiritual life through walking meditation. The labyrinth is located behind the church at the bottom of the hill near the outdoor chapel. 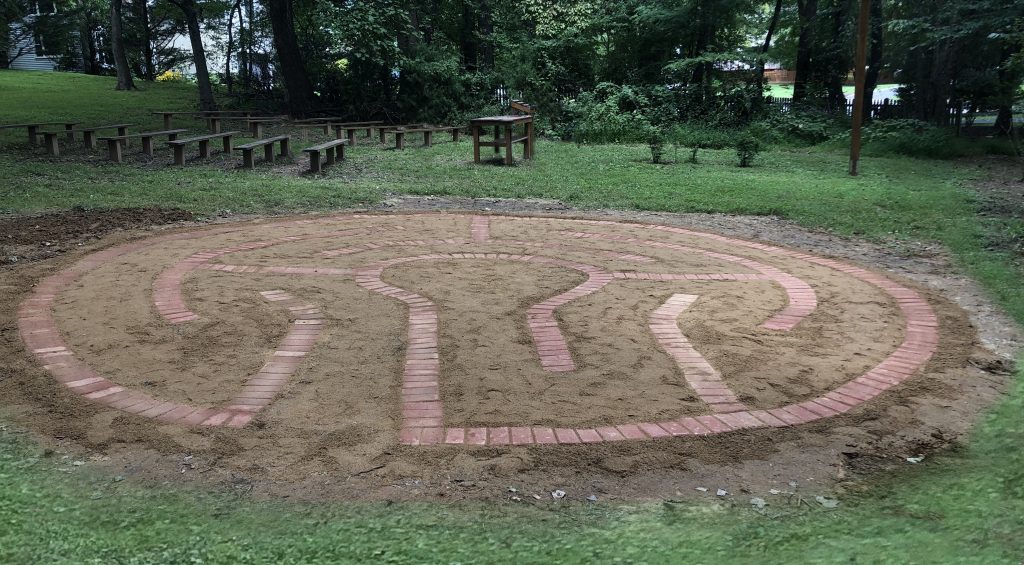 What is a labyrinth?

The word Labyrinth comes from the Minoan word labyrinthos, which can be split into two parts, labrys, meaning double-edged axe (symbol of royal power), and inthos, meaning place. Put these two parts together and they mean double-edged axe place, which means royal palace, and that refers to the palace found on Crete, which was constructed as a labyrinth.

The first-ever recorded labyrinth was found in Egypt outside of a pyramid, which was built more complicated than the pyramids. The most well-known one is what Daedalus created for King Minos of Crete at Knossos to hold the minotaur.

Labyrinths were created and displayed all around the world through history, especially in European times. Cretan coins would display labyrinths; and Italy had some depicted in their cave art. The Roman Empire would display an image of a labyrinth, with a minotaur in the center, on the streets or above doorways to represent fortifications.

Some other countries/cultures also had labyrinths, like Russia where more than 30 stone labyrinths were discovered by the White Sea; it is theorized that they are about 2,500 years old. Southeast Asian Indian manuscripts and cave art would often have images of labyrinths; the Native Americans had what they called man in the Maze, which had many similarities to the classical 7 circuit pattern, and the people would enter from the top instead.

Labyrinths have had a resurgence in popularity in recent years, and there are about 6,000 that have been registered in the Worldwide Labyrinth Locator.

Labyrinths and Mazes do have some aspects that differentiate each other, however, in ancient times, there were no distinctions between the two. Only after the fall of Roman Empire did labyrinths become more spiritual and become differentiated from mazes.

Mazes typically have a separate entrance/exit and have confusing pathways with many branches and dead ends, whereas labyrinths have one entrance, which is also the exit, and are single route with twists and turns and no branches.

Mazes are designed to have multiple levels of difficulty and complexity. They are typically used in science experiences, like testing spatial awareness, as well as testing someone’s intelligence, as they must try and make their way through by using their creativity/knowledge/ adaptability. They were later incorporated into gardens as many wealthy people created them in their gardens to entertain themselves and their guests. Since labyrinths are unicursal, they are not supposed to be hard (nowadays)—they are mainly intended to have spiritual significance.

Remember that labyrinths and mazes can be circular, or any other shape, so do not believe that they are only one shape, if you look them up you can see many different designs of them.

Many churches had/have labyrinths depicted on the floors and walls. They typically were used as a representation of the pilgrims walk to the holy land. Labyrinths have many other representations, such as a path to walk when one has sinned, the difficult life of a Christian, the complex and long path to God, depicting the nature of sin, symbolizing wholeness, etc.

Labyrinths are used in multiple ways for different reasons—the most common way is to use it as a meditation tool for spiritual growth and self-reflection. It can be seen as the path to one’s center and then back out into the world.

Some people like to chant a word or phrase or pray as they walk the labyrinth, but there is no right or wrong way to walk a labyrinth. Remember to be respectful to other people as they walk the labyrinth, this is supposed to be a peaceful place for people to use. If you are walking and someone is coming in the opposite direction, there is no need to talk, all you need to do is step out of the path and let the other person walk by. Then enter back into your original path and continue.

Here is a specific way to use it, that many people follow:

•   Pause at the beginning.

•   Start taking slow and deliberate steps as you walk to the center.

•   Think about a prayer or spiritual question to contemplate during the walk to the center.

•   Once you’ve reached the center, pause to reflect, pray, and listen—listen to what God may tell you.

•   When you feel like you are done, take slow and deliberate steps to the exit.

•   Think about a way to carry what you discovered into the world. 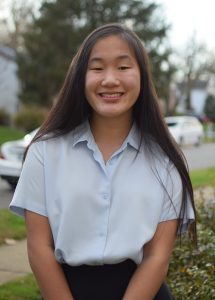 Hello, I am Catherine, I planned and helped build the labyrinth. When I became an Ambassador for Girl Scouts, I was eligible to work on a Gold Award project. The Girl Scout Gold Award is the highest earned award in Girl Scouting. To earn their Gold Award, individual girls identify a community need and spend 80+ hours on a project to meet that need. The project must make a lasting difference in their community and inspire others.

When I learned that my church had been hoping for an outdoor labyrinth for years, I liked the idea of giving back to my church community, as they had helped me grow as a person throughout the years. I wanted to provide people in my church and its surrounding neighborhood with a spiritual resource and give them a tool for self-reflection and growth. I hope that my project makes a lasting difference in the community and that people will continue to use it for their own needs and growth.